The only question before the Court in NAMUDNO was whether the conservative justices would have the gumption to strike down one of the "crown jewels" of the civil rights movement. For reasons that remain obscure and the subject of much conjecturing, they didn't. End of story.

Nobody understood this better than the Warren Court, and particularly the "wily" Justice Brennan.

The question then, as it is now, can be stated simply: "Has Congress exercised its powers under the Fifteenth Amendment in an appropriate manner with relation to the States?" The Court's initial response, in the first draft of Chief Justice Warren's opinion in South Carolina v. Katzenbach, is illuminating. Citing Ex parte Virginia, the Chief Justice explained that "Congress has even broader remedial powers than the courts to effectuate the constitutional prohibition against racial discrimination in voting." (italics mine)

Justice Fortas reacted to this argument with concern: "I wonder if this adds enough to the argument to offset the possibility that it may be used in unforeseeable ways to support arguments to narrow court orders." In response, the language changed as follows: "Accordingly, in addition to the courts, Congress has full remedial powers to effectuate the constitutional prohibition against racial discrimination in voting."

The Court wished to grant Congress much leeway to solve this difficult problem, but it worried that doing so would lead a future Congress to take on the Court. Recognition of this dilemma led Justice Brennan to Footnote 10, and what became known as the Morgan power.

Justice Brennan could see a bigger problem in Katzenbach. He worried that basing much of the Court's holding on the findings in the record would lead the Court down a path it would likely regret. Take a look at his notes from his draft: 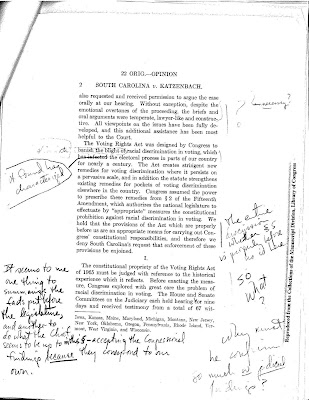 Focus on the language on the bottom left of the page: “It seems to me one thing to summarize the facts put before the legislature, and another to do what the Chief seems to be up to in this [section]—accepting the Congressional findings because they correspond to our own.”

He continued his questioning on the next page: 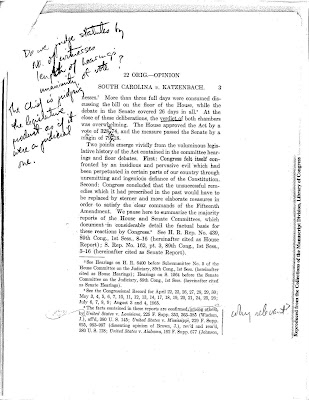 To Justice Brennan, Warren's draft focused on the wrong issue: “Do we judge statutes by no. of witnesses[,] length of hearings[,] unanimity of vote? The Chief is judging the legislative product as if it were a judicial one.”

Justice Brennan returned to this criticism once more: 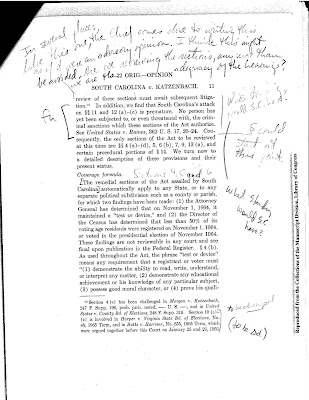 His language is nothing short of prescient: “In several places, like this one, the Chief comes close to writing this as if it were an advisory opinion. I think this might be avoided. Are we reviewing the sections, any more than we are the adequacy of the hearings?”

These questions underscore the political savvy of Justice Brennan. He could see Katzenbach v. Morgan just down the road, a case devoid of the rich evidentiary record found in the South Carolina case. In this light, compare Brennan's opinion in Morgan with Warren's opinion in South Carolina. Their different approaches to the record was stark, as Justice Harlan pointed out in dissent. Brennan wished to avoid the debate all together.

The implications for our debate today are also quite clear. First, the debate over findings that dominated the scholarship post-Boerne is almost as old as the Act itself. Second, Justice Brennan wished to avoid precisely the kind of review advocated by Justice Thomas in his dissent in NAMUDNO. This was an area for Congress to legislate, and the Court would only subject the statute to low level rationality review. Questions of degree were for Congress to assess and determine, not the Court.

Tell it to the conservatives.

Posted by Luis Fuentes-Rohwer at 12:45 PM