This is a good week to be a poor white.  Elites are coming to their defense in the pages not only of the New York Times, but the Wall Street Journal as well. The latest salvo came from Senator Jim Webb, who argues that racial preferences might be appropriate for blacks and their descendants, but not all persons of color, many of whom have not suffered through the same history of discrimination.  He argues that this is particularly unfair when you consider that these advantages exact a cost on whites, who are not a "fungible monolith.".  In essence, and parroting Ross Douthat's earlier column in the Times, Senator Webb argues that poor whites are the ones who end up shouldering the costs of granting special preferences for undeserving non-whites.

A picture speaks a thousand words: 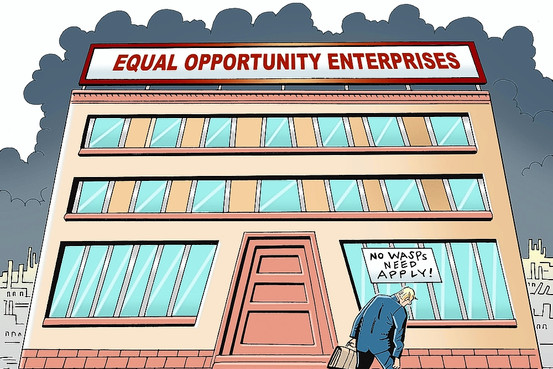 This makes me very curious.  None of the things the Senator writes about are new.  Not one.  Why then, does he felt compelled to have a staffer -- after reading the piece, I can only hope it was a staffer who wrote it, and not a sitting U.S. Senator -- write such a piece?  Was it the Shirley Sherrod debacle, coupled with the Skip Gates's controversy and the recent accusations of racism by the NAACP against the Tea Party?  Was it Matt Bai's contention in the Times that race is "still too hot to touch"? I don't have an answer.

I only have more questions.

When Senator Webb complains that "present-day diversity programs work against" the concept of racial fairness understood as color blind decision-making, what programs does he have in mind?  I must confess ignorance -- perhaps naiveté -- on this point; I really don't know what he means.  He offers, somewhat cryptically, Lyndon Johnson's "initial program," based and writes that it was based on the 13th Amendment and the 1866 Civil Rights Act.  This tells me that he is not talking about the Civil Rights Act of 1964, which was enacted under the commerce power, or the 14th and 15th Amendments.  I am also wondering if he is referring to the Philadelphia Plan, the first time an affirmative-action-as-racial-quotas initiative was put in place by the federal government.  I don't think he is, however, since the Philadelphia Plan was the brainchild of President Nixon in 1969, not Johnson.

Complicating matters, he tells us that these programs place recent immigrants ahead of  "similarly situated whites whose families have been in the country for generations" and "favor anyone who does not happen to be white." These programs also "have damaged racial harmony" and hurt blacks in the process.  This are serious charges, and must be taken seriously.  Unfortunately, Senator Webb offers not a shred of support for his argument.  Nothing.  Nada.  He simply states his views as fact and wishes for them to be true.
To clinch his "argument," he turns to the history of the American South. But the way he uses this history, I don't even know how it helps him.  His retelling boils down to this: not all whites owned slaves; the region was ravaged by war, and all its citizens were affected irrespective of race. This meant that by 1974, research data showed that white Baptists nationwide averaged a level of education similar to the black average; and the percentage of white Baptists and Irish Protestants with college degrees was lower than the national average and much lower than the "Jewish average" or the average of students of Chinese or Indian descent.  And lest we forget, whites are not a "fungible monolith."  This is to say, with Douthat, that we must not forget that poor whites need help from the government too.
Here's the thing: if Senator Webb is worried about the scope of what he terms our "nondiscrimination laws," I must agree that we should pay attention to any group within our society who is subject to discriminatory treatment.  I cannot imagine anybody would disagree with that.  If poor whites are subject to invidious discrimination by the government, then by all means government must take steps to remedy the discrimination.
If, instead, the point is that government must help those who, historically, end up "at the bottom of the well," then I am also happy to concur with him that poor whites deserve a hand as well.  I am even happy to give "special consideration" -- heck, I am even willing to set-aside seats in incoming college classes and set quotas for "job promotions and lucrative government contracts" -- for anyone who is historically disadvantaged, including poor whites.  In saying this, I only wish to underscore the obvious: if I read Senator Webb correctly, then he is moving us away from the classic canard of conservative thought when it comes to race.  This is the view that merit trumps all, and that all of us must rise or fall in accordance to our individual accomplishments.  Senator Webb, with Douthat, appear to question that basic assumption, and argue instead that while special considerations are a good idea, they are only being directed at the wrong groups.  If so, I applaud them for doing so.


I will say this for the column:  I loved the picture. Cute.
Posted by Luis Fuentes-Rohwer at 12:46 AM