The Savannah, Georgia of the late 1950's and early 1960's was a cauldron of Black political activism. Many organizations, from the Southern Christian Leadership Conference and the NAACP to the Chatham County Crusade for Voters led voter registration drives, economic boycotts, and demonstrations against segregated public facilities.  In 1963 alone, Blacks in Savannah had mass meetings every Sunday in order to drum up support for the movement. On July, 12, 1963, tensions erupted and 2000 Black demonstrators were scattered with tear gas and water hoses. In 1965, during the voting rights march from Selma to Montgomery, 650 Blacks in Savannah held their own march as a show of solidarity. 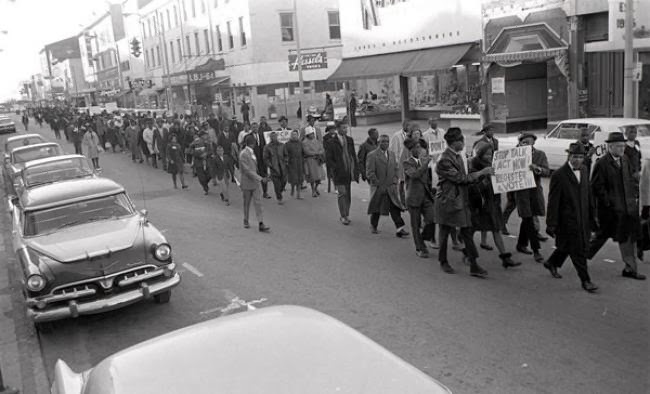 It is clear to anyone paying attention that Savannah, Georgia played host to a very rich and very active civil rights community.

Not so, however, to Justice Thomas. As he recently told an audience at Palm Beach Atlantic University in West Palm Beach, Fla,

'My sadness is that we are probably today more race and difference-conscious than I was in the 1960s when I went to school. To my knowledge, I was the first black kid in Savannah, Georgia, to go to a white school. Rarely did the issue of race come up,'

We could try to make sense of what, at first blush, makes no sense.  Dahlia Lithwick writes, for example, that

Maybe the issue never came up because color simply determined everything: where you could sip water, where you could swim, where you could go to school, which doctors you could see, which gas stations would allow you to use their restrooms. Maybe there was a lot less to talk about, not because nobody noticed racial differences but because the legal regime crafted to perpetuate those differences was omnipresent and seemingly impregnable.

But that's far too charitable.  The question for anyone living through these tumultuous times is not whether the race issue ever came up.  Rather, the question is how anyone could live through the Savannah, Georgia of the 1960's and remain unaware of the social and political revolution brewing.

This is the same man who could confidently say that there is no longer a need for the Voting Rights Act.  We have a right to wonder, in light of these recent comments, how he knows this.

Posted by Luis Fuentes-Rohwer at 4:24 PM