Here is how a cartoonist sees the labor strife that threatens to derail the upcoming NFL season: 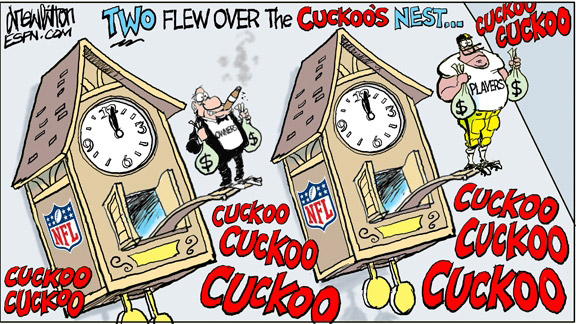 I suppose it it is easy to see this negotiation as a fight between rich owners and rich players over divvying up a nine billion dollar pot of money. Unquestionably, it is hard to figure out who the good guy is.
One could choose to focus on the greed of the owners and side with the players by default.
Instead, I think about the late Bob Probert, former hockey player who died last year and donated his brain for study. In recent days, researchers at Boston University concluded that Probert had  Chronic Traumatic Encephalopathy, a degenerative brain disease that is caused by repeated trauma to the brain.  I think also about Dave Duerson, former safety for the Chicago Bears who committed suicide last month and also donated his brain to BU. Or Andre Waters, former safety for the Philadelphia Eagles who killed himself in 2006, and whose brain tissue was that of an 85-year-old man in the early stages of Alzheimer's disease.  Or Owen Thomas, a 21-year-old college football player who commited suicide last April. I can think of too many names.  Tom McHale.  John Grimsley.  Mike Webster. Justin Strzelczyk. Terry Long.
I don't really care how much money the players ultimately make.  For clearly, it is not enough.
Posted by Luis Fuentes-Rohwer at 2:17 PM