The LA Times has an interesting story on what has been described as the "whitest Oscars" in years.


Shortly after the Oscars ended Sunday, Samuel L. Jackson sent an e-mail to a Times reporter wondering why no black men had been chosen to present awards on the film world's biggest stage.

"It's obvious there's not ONE Black male actor in Hollywood that's able to read a teleprompter, or that's 'hip enuf,' for the new academy demographic!" Jackson wrote. "In the Hollywood I saw tonite, I don't exist nor does Denzel, Eddie, Will, Jamie, or even a young comer like Anthony Mackie!"

Jackson may be on to something, at least when it comes to the young comers.

There is still a sizable number of black actors in Hollywood with box-office clout and meaty roles, a point that will be underscored when the NAACP hands out its annual Image Awards in Los Angeles Friday night. Will Smith is the biggest movie star in the world, a title he's held now for several years, and Denzel Washington remains at the peak of his box-office powers.

But most of the prominent male black stars sit on the other side of 40. The best known of the next generation -- say, Derek Luke (36), Chiwetel Eijofor (33), Idris Elba (39) and Mackie (31) -- are not only less influential, they're not nearly as popular in their 30s as the previous crop was at their age. (Washington, for instance, had already won an Oscar and made "Glory," "Malcolm X" and "Philadelphia" before he hit the big 4-0.)

That's not because any of these actors aren't capable of pulling off a "Malcolm X" or a "Philadelphia," of course. It's because they're not given the chance. Mackie has one of the more substantive studio roles for a younger black actor in a while as Matt Damon's guardian angel in this weekend's "The Adjustment Bureau." But it's hardly the role of a lifetime.

"It's frustrating that the movies I want to make I haven't been able to make," Mackie told 24 Frames. "Orlando Bloom was given 15 opportunities after 'Lord of the Rings.' Black men are given no opportunities." 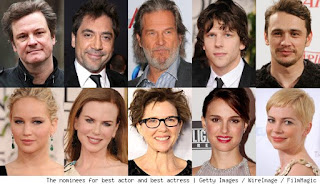 UPDATE: And the future may hold little promise of improvement: the L.A. Times story declares "nine newbies ready to break out"--all of whom happen to be white men. The intro declares that the nine "hail from the four corners of the English speaking world." In a California where whites form a minority, selecting nine men, none of whom appears to be a person of color, is astonishing.
Posted by Anupam Chander at 8:50 PM