The Strange yet Unremarkable Case of Jeremy Lin

Stop me if you've heard this story before: A terrific high-school athlete is overlooked during the recruiting process because he does not fit the stereotype of what college athletes are supposed to look like.  He ends up at a terrific college, yet not an athletic powerhouse.  He has a terrific college career, but pro scouts ignore him the same way college coaches ignored him before. He catches on with a pro team, and then another, and then another.  He is not sticking with any one team for long.  And then, almost out of necessity, he gets a chance.  One chance.  One time.  One game.  And he blows it out of the water.
The story is almost out of central casting, tailor-made for Angelo Pizzo.  For those not paying attention to the world of sports in the last week or so, this also happens to be the story, in a nutshell, of Jeremy Lin, Taiwanese American point guard for the New York Knicks.  How in the world do we explain the fact that a multi-million dollar system designed to scout talent missed as badly as it missed with Jeremy Lin? Here's the cold reality: 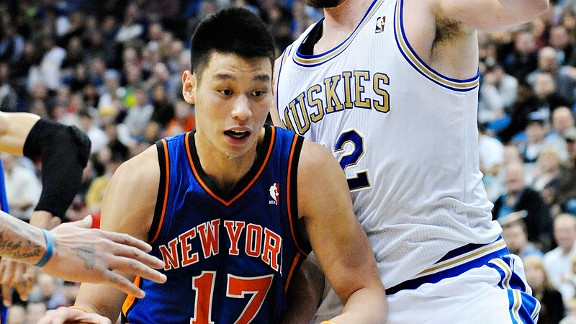 "It's the Asian thing," says former NBA player Rex Walters, who's Japanese-American and wound up with [Jesse] Evans' job at [the University of San Francisco]. "People who don't think stereotypes exist are crazy. If he's white, he's either a good shooter or heady. If he's Asian, he's good at math. We're not taking him."

Lin looks like a math major, not a basketball player.  Simple as that.
But make no mistake, this is not a new story. We have seen it a million times.
This is the story of Toby Gerhardt or Brock Forsey, white running backs in a world where running backs happen to be black; or the story of many black quarterbacks in a world where quarterbacks happen to be white.  The argument applies to basketball players and concert pianists, to college professors and football coaches, to welfare recipients and college students.  Stereotypes abound, and they affect our decision-making in ways that we often fail -- or refuse -- to recognize.
Think about what this means for debates over hiring and college admissions.  Close your eyes a moment and think about what a college student is supposed to look like, or better yet, a college professor.   As you do that, try to imagine what happens when a faculty gets together to choose a new colleague, or worse yet, when a faculty gets together to vote on a tenure case.  Even those who have never been privy to one of those meetings have a pretty good idea of what goes on.
Ask Rex Walters.
Posted by Luis Fuentes-Rohwer at 3:45 PM