A scant few weeks after Ohio State threw Jim Tressel under the bus and blamed their current problems on the coach, the University unveiled a mural honoring their old coach 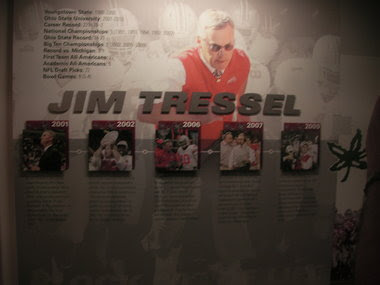 This is a bit tricky, even controversial.  Without question, the coach had a great run as coach of the Buckeyes, winning 6 Big Ten titles and a national championship, going 8-1 against hated Michigan, and sporting a nifty 94-21 overall record.  No question that Tressel is a terrific coach.  There is also no question that his stint at OSU is deserving of a mural.
On the other hand, what kind of a message does this send not only to the NCAA, but also to fans of college football, to high school students, and to the people of Ohio?  How in the world do we consistently profess derision at Tressel's actions yet turn around a few weeks later and unveil a mural in his honor?
I don't think there is any question that coach Tressel's actions on the field are deserving of a mural.  But so soon?
This is like a poke in the eye to all the reformist talk of recent months. it is as if Ohio State does not care.  This is particularly hubristic for a school that is currently awaiting the result of an NCAA investigation and whether that body will add to the schools self-sanctions in the wake of the Tressel scandal.
NCAA and university presidents everywhere: your move.
Posted by Luis Fuentes-Rohwer at 11:52 AM