Thinking about a white Michael Vick

I can hardly think of a quarterback who has accomplished as little as Michael Vick has accomplished yet with as much press.  I am not saying it has never happened.  I just cannot think of any.
Here's the latest, which thankfully is not related to his football life: would Michael Vick be treated the same way for abusing his dogs if he were white?  This is from a piece for ESPN the magazine:

All of that is why, to me, Vick seems to have a deeply African-American approach to the game. I'm not saying that a black QB who stands in the pocket ain't playing black. I'm saying Vick's style is so badass, so artistic, so fluid, so flamboyant, so relentless -- so representative of black athletic style -- that if there were a stat for swagger points, Vick would be the No. 1 quarterback in the league by far.

Race is an undeniable and complex element of Vick's story, both because of his style as well as the rarity of black QBs in the NFL. A decade after he became the first black QB to be drafted No. 1 overall, about one in five of the league's passers is African-American, compared with two-thirds of all players. But after his arrest for dogfighting, so many people asked: Would a white football player have gotten nearly two years in prison for what Vick did to dogs?

As soon as the reporter wrote this question, he began to hedge about its import.  For example, "[t]his question makes me cringe. It is so facile, naive, shortsighted and flawed that it is meaningless. Whiteness comes with great advantages, but it's not a get-out-of-every-crime-free card. Killing dogs is a heinous crime that disgusts and frightens many Americans. I'm certain white privilege would not be enough to rescue a white NFL star caught killing dogs."  All the same, he thought to ask it, and on a mainstream magazine to boot.
From what I gather, the reaction has been deafening, and largely negative (see here and here; but see here). But it appears that the negative reaction is largely a response to a decision by ESPN to offer a picture of a white Michael Vick. 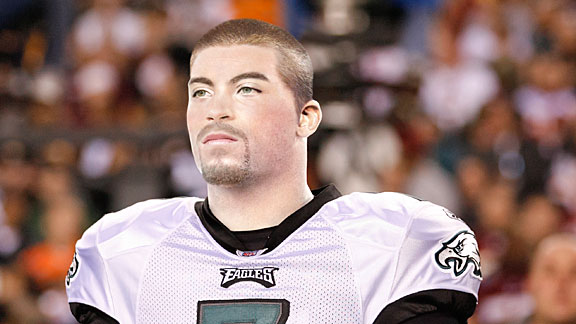 I don't get it.  The idea itself is hardly crazy, that a white person would be treated differently than a black person for the same offenses.  So is the problem here with the picture?